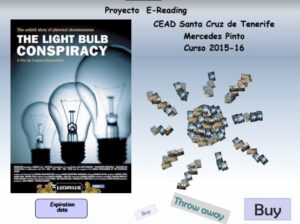 This activity was carried out in English by teachers and students from the Economics and Business Studies Department.   We are not a CLIL school. This was an activity  to introduce English in subjects which are taught in Spanish.

-To assist the development of innovative practices regarding tertiary level formation, as well as its transparency and distribution.

-To promote new tools and skills to help students cope with change, an essential requirement for access to employment and active participation in society

To encourage equal opportunity between men and women by equal participation, elimination of architectonic barriers, to fight against racism and xenophobia

Films are really useful to learn new vocabulary. This activity has been carried out in the academic year 2015-2016 and our idea is to continue using it in the future. What does the activity consist of?

Bhutan, a small country enshrined in the Himalaya’s leads the way in the pursuit of holistic, inclusive and truly environmentally sustainable development.

Statistician Nic Marks asks why we measure a nation’s success by its productivity — instead of by the happiness and well-being of its people. He introduces the Happy Planet Index, which tracks national well-being against resource use (because a happy life doesn’t have to cost the earth). Which countries rank highest in the HPI? You might be surprised.

The Story of Stuff exposes the connections between a huge number of environmental and social issues, and calls us together to create a more sustainable and just world.

As Secretary General of the United Nations, Ban Ki-moon aims to advance peace, development, human rights and environmental conservation. He is pleased to contribute a little every day to the wellbeing of others, especially the poorest.

Some videos in Spanish and English.-

Planned Obsolescence is the deliberate shortening of product life spans to guarantee consumer demand. As a magazine for advertisers succinctly puts it: “The article that refuses to wear out is a tragedy of business “ – and a tragedy for the modern growth society which relies on an ever-accelerating cycle of production, consumption and throwing away.

The film examines through the story of entrepreneurial single mother Angie , the world of illegal immigration, casual labour and brutal exploitation.

This film was a huge success a few years ago. It tells the rise to fame of the world’s youngest billionaire, Mark Zuckerberg, the creator and owner of Facebook. Adapted from the 2009 book, The Accidental Billionaires, by the critically acclaimed writer Aaron Sorkin, its dialogue is tense, realistic and varied – and so well written that the film won the Best Adapted Screenplay Oscar at the Academy Awards.

As well as being an intense and exciting true-life tale of modern business  this film is rich in its varied use of language. Taking you from the everyday college speak of Zuckerberg and his pals studying at Harvard through to the tough, clinical language used in the modern day corporate world, it’s guaranteed to improve your vocabulary.

You can’t afford to miss on this one! A must watch for all business students. The Godfather is a 70mm bible about why relationships and building networks are important and  why helping people is good for business . What does a real-life CEO have in common with the central figures of a fictitious Mafia crime family in The Godfather? According to  some well-know  CEOs, plenty. These CEOSs  don’t believe  crime or violence, and  they are not suggesting business should operate like the Mafia,but there are some universal themes in the movie they  can relate to as  CEOs. The Godfather offers valuable lessons in community and team building, making tough decisions, and playing to win while not neglecting friends and family. Based on Puzo’s best-selling novel of the same name, The Godfather is widely regarded as one of the greatest films in world cinema .

No list of business movies is complete without this classic. Wall Street has got it all – a great cast, Oscar-winning performances, an angry young director in Oliver Stone, and razor-sharp dialogue that exposes and satirizes the cutthroat world of finance and trading. Michael Douglas stars as the wonderfully-named bad guy Gordon Gekko, playing mentor to Charlie Sheen’s greedy and naïve stockbroker, Fox.

The second part takes place in New York, 23 years after the original, and revolves around the 2008 financial crisis. Its plot centers on a reformed Gordon Gekko,

The fast-paced world of illegal stock trading makes for a thrilling movie, and in language terms is packed with so many great lines that are still quoted today. It’s responsible for popularizing plenty of tough-talking business phrases like ‘If you want a friend get a dog’, and ‘lunch is for wimps’.

Up in the Air is a 2009 American comedy-drama film directed by Jason Reitman It is a film adaptation of the 2001 novel of the same name, written by Walter Kirn. The story is centered on corporate «downsizer» Ryan Bingham (George Clooney) and his travels. He fires people. But firing is a harsh word, so he doesn’t use it unless he has to. Instead, he informs employees their jobs will no longer be available. Then he consoles them as they break down, hands them an informational packet, and leaves them forever. Somewhere along the line, he also offers some advice that makes their dismissals sound like the beginning of a glorious new tomorrow. It’s canned, but it sounds sincere coming from Clooney, and not just because he offers it with an unblinking gaze that suggests conviction. He really believes it. Or at the very least, he believes in a life without attachments, in which he drifts from airport lounge to hotel room  to his Omaha apartment only when need requires. “Living is moving,” Clooney tells a group at one of his occasional motivational lectures .

“Do you know why I hired you? I always hire the same girl—stylish, slender, of course… worships the magazine. But so often they turn out to be—I don’t know, disappointing and, um… stupid. So you, with that impressive resume and the big speech about your so-called work ethic—I thought you would be different. I said to myself, go ahead. Take a chance. Hire the smart, fat girl. I had hope. My God, I lived on it. Anyway, you ended up disappointing me more than any of the other silly girls.” —Miranda Priestly

The Devil Wears Prada is an amazing film exploring all the dynamics of women in the workplace, especially the scary ones. But again, Miranda Priestley is a victim of her own powerful persona and people don’t know what to do with that. Her character is based on the always scary, but completely brilliant Anna Wintour, Editor-in-chief of Vogue, and the similarities (from the office design to the soft-spoken commands) are amazing. The beautiful fashion in the film helps, but really this film is all about women and their careers.

Other suggested titles ( in Spanish)

According to the Economics teacher, this activity  was very useful because It allowed  students to approach the subject, Economics, beyond their  native language, which helped to broaden and enrich their vision.  English is also the language of Economics since there are many words in this field  which are used in that language even in Spanish.

It could be a very interesting activity to be carried out every year.

Vídeo on the films.

Up in the air