Today we had done two jobshadowings, both of them with the social science teacher and mentor of the Grade 6. Actually, I am focusing on the second one.

First of all, we should bear in mind that religion is not a subject itself as in our curriculum but according to the Swedish one, it belongs to social science as one of the branches of this subject.

Students were 11-12 years and they are going to work on a project which final product will be the preparation of a video telling the similarities and differences about religions, for instance; hinduism and islamism. Besides, the teacher gave them the chance to work in pairs or individually and they were also expected to work step by step daily by finding out information in different resources provided by the teacher. 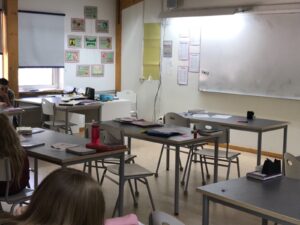 In the afternoon, we visited a town called Signuta next to Mälaren lake founded in the year 980. Certainly, one of the oldest in Sweden and mainly visited by tourists to admire its historical monuments and traditional shops.